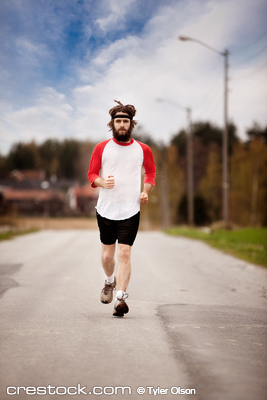 Running or also called jogging, which is a slight run is probably the most popular exercise that people do to maintain or lose weight.

Probably you wondered many times how many calories you burn if you run 1 hour. People who already introduced running into their lifestyle are not disturbed anymore by this question. The amount of calories burned differ a lot depending on age, weight, methabolism, intensity. Some of those things are very hard if not impossible to measure.

This is why people stop wondering how many calories they burn on different exercise. While trying to find an answer to this question they should have already ran for about 10 minutes.

This is what people who have results do: they stop thinking at things that don't matter and start doing things.

But here another question arives ? How they concluded that running is benefic in their weight loss program. It is easy, they started a program, they obeyed it, and they track the global results.

Running is benefic in many ways. It is not just burning the surplus of calories. Running will keep your muscles tonified and you will feel much better. You won't have pains anymore when you have to get up from your chair or bed. All their activities are improving if they are running every day. Even the ones where only the brain is involved.

They will sleep well after they do their daily exercices, they prevent gaining weight.

Sometimes there is a problem with running, you don't have where to go to run or you are shy to run by yourself. Or you simply don't have enough time.

A solution that can help some time is a treadmill. There are the same benefits as running outside, you save time by not having to spend time to go in a park or a gym and you can run whenever you want.

That's being said you only have to want to run and you will see the benefits.

The amounts of calories you burn when running depends on the speed, what you ate before, many other things, but as estimates. For example, if you have 180 pounds and you run 1 hour at 6km/hour you will burn anywhere between 350 and 550 calories depending on many other factors.

If you want to keep track of all calories you eat or burn you can just use an estimate, for example take 450 as an estimated value and work with that. Someday you will get tired of doing maths and you will just want to do the work.


Warning: Use of undefined constant php - assumed 'php' (this will throw an Error in a future version of PHP) in /home/calotor/public_html/wp-content/themes/zerif-lite/sidebar.php on line 1

This website uses cookies to improve your experience while you navigate through the website. Out of these, the cookies that are categorized as necessary are stored on your browser as they are essential for the working of basic functionalities of the website. We also use third-party cookies that help us analyze and understand how you use this website. These cookies will be stored in your browser only with your consent. You also have the option to opt-out of these cookies. But opting out of some of these cookies may affect your browsing experience.
Necessary Always Enabled
Necessary cookies are absolutely essential for the website to function properly. This category only includes cookies that ensures basic functionalities and security features of the website. These cookies do not store any personal information.
Non-necessary
Any cookies that may not be particularly necessary for the website to function and is used specifically to collect user personal data via analytics, ads, other embedded contents are termed as non-necessary cookies. It is mandatory to procure user consent prior to running these cookies on your website.
SAVE & ACCEPT